Around the US, GT programs are slowly vanishing. Each month seems to bring a new announcement of program closures.

Last February, Boston’s Public Schools suspended its city-wide entry process for Advanced Work classes. In October 2021, New York City decided to phase out all of its GT programs and in November, Charlottesville, Virginia followed suit. This year, high-profile schools in Barrington, Rhode Island, and San Diego decided to eliminate honors classes. And Seattle has decided to phase out all GT programs over the next five years.

Should all students be equal?

Why are all these programs for gifted and talented students being cut?

Surprisingly, it’s not due to Covid, or even budget concerns. The most frequently cited reason is “equity”.

Proponents of GT program closures cite numerous statistics around enrollment to support the argument that these programs are unfair and that all students should be enrolled together. Tracking, they argue, exacerbates inequalities of race and income. Some districts have gone so far as to call GT programs “manufactured brilliance and “opportunity hoarding”.

It is definitely true that minorities and low-income students, as a whole, are underrepresented in GT, accelerated, and honors programs. According to the National Center for Education Statistics, in the 2017-18 school year, black students represented 15% of the overall student population in the US but only 8% of students in gifted education. White students were 48% of the public school population but made up roughly 58% of those in gifted programs.

However, is eliminating GT programs really going to magically put all students on the same equal footing? Of course not! If anything, eliminating public GT programs harms minorities and disadvantaged students more than any others. These students are less likely than more privileged students to be able to find substitutes for accelerated education (such as private school, tutoring, or homeschooling).

The consequences of eliminating GT programs

Many experts say that eliminating GT programs will only disadvantage minorities and low-income students even more.

They argue that wealthy students will leave for private schools with GT programs, exacerbating the income inequality gaps in the educational system.

In addition, lowering the bar so that all students are mediocre harms students’ competitiveness for college and careers. It has been shown that the rigor of high school courses predicts academic success in college.

If achieving equality for minorities and low-income students is really important, shouldn’t we strive for equality of access and outcomes for students of the same cognitive ability? Rather than making sure that no student passes a certain achievement bar?

If we want more academic achievement and better life outcomes for GT minority students, we need more access to GT programs, rather than less!

Furthermore, accelerated education for GT students helps the US to compete internationally with other countries in the battle for scientific, medical, and business talent. The US already lags many other developed countries in PISA test scores (Figure 1), and is trailing China, one of its chief rivals, by a long way! This would only get worse if GT programs are discontinued.

Imagine, for example, that high school 100m sprinters were suddenly told that by law they could only run as fast as the slowest runner in their school. How well would the US be able to compete in future Olympics under that scenario? 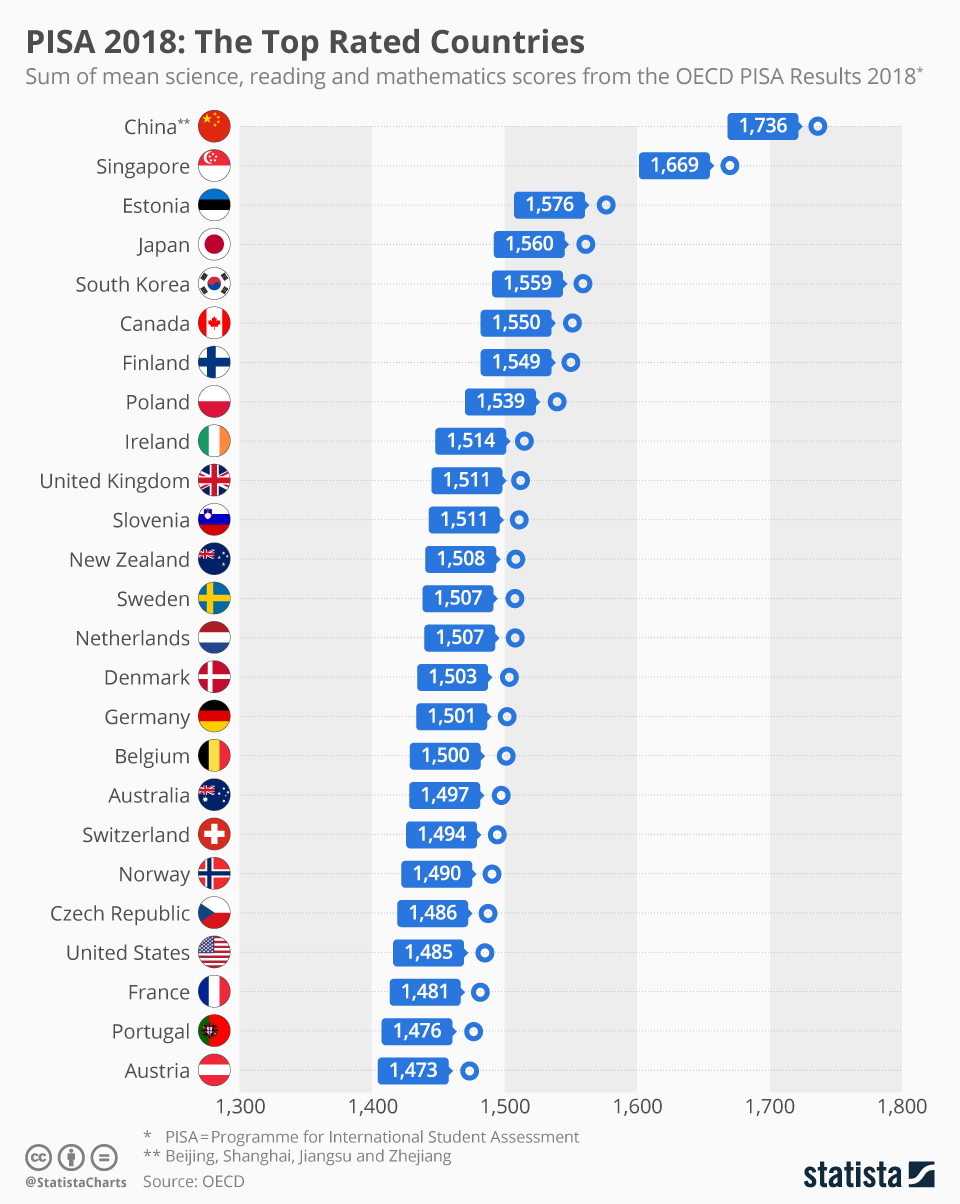 The principal reason, however, why GT programs should not be eliminated, is because they benefit GT kids immensely!!

For support, we can look to psychological research studies, especially longitudinal studies, which are instrumental for understanding why GT education is so important for GT students.

There have been various longitudinal studies conducted with GT students as subjects. In the US, the most famous are the 90+-year Terman study and the 50-year Study of Mathematically Precocious Youth, or SMPY study.

In a meta-analysis of 38 studies on GT children conducted between 1984 and 2008, Steenbergen-Hu and Moon (2010) found that GT students who are accelerated tend to outperform students who are not accelerated in their performance on standardized achievement tests, college grades, degrees obtained, and the status of universities or colleges attended.

In the Terman study, after controlling for educational attainment, male GT students who had skipped a grade earned an average of 9.35% more annually than non-grade skipping men (Warne and Liu, 2017).

What does the future look like for GT programs?

The trend toward closing GT programs is not stopping anytime soon. It is possible that sometime soon, public school GT programs will be a thing of the past.

What does that mean for accelerated education?

Many schools have proposed replacing GT programs with “enrichment for all”. In theory, this is a nice concept and has the potential to work if well implemented. There is even research that shows that when tracking is eliminated, GT students’ outcomes are not negatively affected, as long as they still have access to accelerated education. If they do not, their achievement will likely be affected- Rees, Argys, and Brewer (1996) concluded that high achievers pay a price for placement in heterogeneous math classes without enrichment programs. Their achievement falls by approximately 8.4 percent.

Although the theory of “enrichment for all” is utopian, in practice it would essentially mean that teachers would be tasked with both identifying students who wish to learn more and faster, and designing additional lesson plans for those students. Placing the burden on overworked teachers to implement accelerated learning in sometimes crowded classrooms will have an inevitable result: those students who are ahead will be left to their own devices, while valuable teacher resources are spent helping those students who are falling behind.

Those responses are sobering. The fact is that dedicated GT programs guarantee GT kids access to accelerated education, rather than just aspiring to give them access.

Why not reform GT program admissions instead?

There are other solutions. Not all schools are simply closing gifted programs.

In Philadelphia, the school district has taken a different approach to try to address inequalities in admissions. The district has overhauled the admission process to its most selective high schools by putting the names of all qualifying students into a lottery instead of letting individual school leaders shape their incoming classes. This is intended to avoid human judgment and remove implicit or overt racism from the process. Although the process seems to be having some teething problems and may need to be refined over time, the thinking behind the process should be applauded. Instead of eliminating GT programs that benefit many students, this school district instead is aiming to eliminate access problems, creating more equal opportunities and a more diverse program for all students.

Chicago is also looking at reforming its admission procedures for its accelerated learning high schools. Although revisions are only at the proposal stage, one proposal the school board is considering is to divide all its seats equally amongst 4 socioeconomic tiers. At the moment, only 70% of seats are allocated that way, with the remaining 30% allocated to the highest grades and test scores, regardless of socioeconomic status. The hope is that dividing the seats equally would bring enrollment demographics in line with population demographics.

Since the 1990s, Miami has been using two standards to identify gifted students– one for low-income kids and English learners, another for everyone else. The city’s school board recognizes that a child’s IQ is not static and can be increased with exposure to books, or shrink as a result of stress (as might be more common in low-income families). As a result of these two admission standards, the demographics of its GT programs resemble the district’s demographics.

These types of proposals make a lot more sense than simply cutting GT programs for all gifted students. Sadly, many districts are not considering improving admission procedures, preferring instead to ax programs for everyone.

What options do GT students have?

We at gt.school (obviously!) are strong proponents of expanding GT education and improving access and opportunities for all gifted and talented students.

However, unfortunately, the trend appears to be going in the opposite direction. In the future (even more than is the case today), we expect that many GT students will not have access to accelerated education.

The cuts are not even limited to GT programs. In some places, all forms of accelerated education are under attack, whether AP and honors classes, or even advanced mathematics! California is currently updating its mathematics framework, and an initial draft of its proposal recommended eliminating grouping students based on ability, and refraining from offering algebra until ninth grade. Although the proposal has now been updated to include the possibility of offering Algebra I in 8th grade, it is still being discouraged. Districts that want to offer Algebra I in 8th grade are recommended to require a summer course or additional preparation before allowing students to take it.

This is where we come in. If your child’s local GT program has been eliminated or curtailed, is too restricted or conventional, or there are no acceleration options available at all, gt.school can help.

Our after-school program for GT kids nationwide adapts to each student’s level, enabling them to learn much faster than in traditional school. We also combine academics with instruction in life skills and academic coaching, to truly unlock their potential.

We believe access to accelerated education is extremely important for GT kids, and that’s why gt.school is passionate about helping GT kids thrive!

What successful athletes can teach us about achieving academic success

Can your child pitch a 70mph fastball? Or serve a tennis ball like a young Serena Williams? Have they worked hard to become the best scorer on their AAA hockey...

Do you have a gifted child that struggles with organization, time management, or maybe writing skills? While most gifted children have the potential to excel academically, many face difficulties with...